If you’ve ever seen an alligator gar, you know how dangerous it seems to be.

Teeth are razor sharp, and the snout is similar to an actual alligator’s.

Believe it or not, the alligator gar is one of the freshwater fish that can easily exceed 100 pounds in weight – there are only two such species.

Now, while it does look dangerous and aggressive, the truth is alligator gar is not that bad.

Some people don’t even know that you can eat it, yet it makes an excellent ingredient.

Now, what does alligator gar taste like? Is it worth the hassle?

What is Alligator Gar? 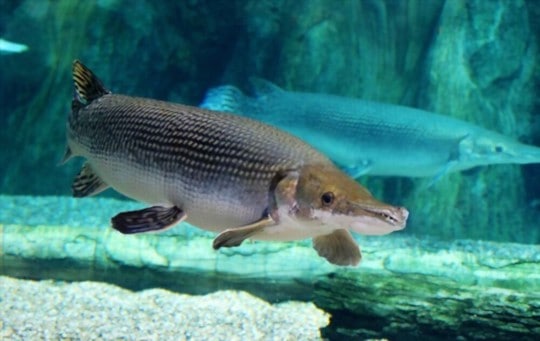 Alligator gar is the largest fish in its family.

Common around North America, it’s one of the oldest species in the world – this is why it’s referred to as a living fossil.

Alligator gar has retained many of the primitive characteristics of its ancestors.

For example, it can breathe both air and water, not to mention the spiral valve intestine.

The name is given for a pretty good reason – the head is similar to an alligator’s, even the appearance.

The fish will grow up to 10 feet in length, so it can definitely impress with its size.

That being said, given its popularity in North America, the alligator gar is more common in local cuisines.

It can be cooked in a bunch of different ways too.

Now that you have a few clues about the fish, what does alligator gar taste like? Is it worth the time and effort?

You can look at alligator gar and realize that meat is quite dark – it might put some people off, but it has nothing to do with the taste.

This dark meat tastes a bit like game – if you like hunting, you will know precisely what to expect.

But then, despite the color, the meat is also quite light and mild.

The flavor is easy and not too fishy.

From some points of view, it tastes a bit like lobster.

But then, the texture is different from what you might expect from fish.

Forget about that flaky type of flesh – instead, the texture is similar to chicken.

Now, some people remove the dark meat before cooking it, but this is not always the case.

The dark part is responsible for most of the flavor, so you want it there.

Other than that, if you are not into fishy flavors, you can choose to marinate the fish in saltwater.

You don’t have to do it for too long, though – just one night.

This procedure will make it taste more like game.

Despite the taste, alligator gar should not be eaten raw.

When raw, its flavor is too intense.

On a side note, make sure you never touch alligator gar eggs – not to mention eating them.

They are very toxic to people because of a protein toxin, which will cause all sorts of negative symptoms.

How to Prepare and Cook Alligator Gar? 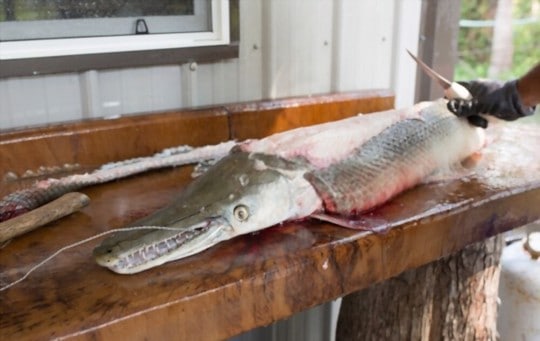 You can prepare alligator gar in a bunch of different ways.

If you like to cook it as you catch it, there are plenty of options.

For instance, some anglers prefer cutting the fish into fillets and frying everything up.

Some others prefer grinding all the meat before making patties, which are quite tasty due to the game flavor.

Alligator gar can also be barbecued or roasted – prepare some fillets and get them to cook.

However, roasting is mostly recommended for large fish.

You need a very large fish to ensure you have long flanks – otherwise, you may not end up with too much meat.

In traditional kitchens, people prefer to mince all the meat and shape it into balls.

They can be fried, but not before being breaded in cornmeal.

In terms of precautions, make sure you clean the alligator gar properly.

You need to wrap the snout, even if the fish is dead.

Otherwise, you risk cutting yourself in those super sharp teeth.

The same rule applies when descaling the fish.

Native Americans used scaled as arrowheads, so you can tell they are pretty sharp and dangerous.

Keep in mind that alligator gar has internal air bladders, meaning it can survive for a long time after being taken out of water.

As a short final conclusion, alligator gar can taste differently, depending on how you cook it.

Leave the dark meat, and you will get a bit of flavor.

Remove it, and the flavor will be extremely mild.

One thing is for sure, though – it is a tasty fish, and the meal is only the reward.

The actual challenge of getting such a fish is definitely difficult.

Other than that, there are plenty of different ways to cook this fish, which makes it quite versatile.