If you’ve heard of Chapagetti, then you most probably have seen a lot of viral Korean videos on YouTube that are categorized as ‘muk-bang.

’ This dish is pretty similar to black bean noodles, so if you like them, you’ll probably like Chapagetti too.

It’s extremely popular, but many people still don’t know what it is.

For most Korean food enthusiasts, it’s definitely a hit dish.

However, others have a lot of criticisms when they try out the dish.

If you’d like to know why this dish is such a contradiction, then read on.

You can find out the answers to often-asked questions, such as “What does Chapagetti taste like?”. 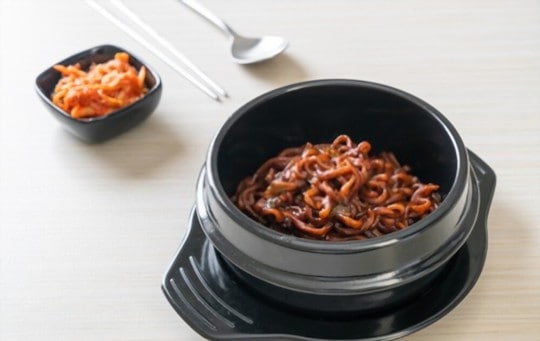 Chapagetti is a type of instant noodle that’s similar to both the black soybean paste of China or Chajang and Italian spaghetti.

This fusion noodle is a branded product of the famous Korean food company called Nongshim.

It’s globally sold and is one of the top-rating instant noodles within the country itself.

The Chapagetti noodles have been in the market for decades in South Korea and only recently have been an international sensation among food enthusiasts.

Within the packet of Nongshim Chapagetti, you will find excellent quality noodles that are thick and can absorb the delicious sauce.

Speaking of sauce, you get a black bean sauce that is, unlike the sauces in other ramen packets, grinded and powder-like.

This black sauce is then finished with a packet of vegetable mixture.

Consisting of diced onions, carrots, and chunks of potato, this Nongshim mix is made to compensate for the traditional pork chunks that are usually served with the noodles. 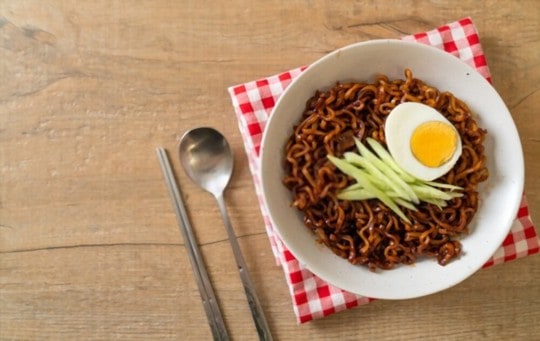 If you have tried Jajangmyeon, then you don’t have to worry about the taste of Chapagetti.

This instant noodle packet is almost similar to it, but of course, it has some differences.

Some sources have said that when you taste Jajangmyeon and Chapagetti together, you’ll notice a vast difference in depth regarding texture and flavor.

Basically, Nongshim Chapagetti has a milder and more tender flavor profile than Jajangmyeon.

Although the noodles themselves are more chewy and thicker, the sauce, on the other hand, is not.

It runs lighter and thinner than the traditionally made dish, but it still blends and covers the noodles well enough for you to enjoy the dish wholeheartedly.

Like other instant black bean noodles, Chapagetti is considered to have notes of both sweetness and bitterness.

You can taste the noodles and be reminded of the mild bitterness of unripe carrots and the sweetness of fresh onions.

However, each spoon that you have of this dish is very filling.

Owing to the bean sauce, the dish is highly savory and, therefore, rich.

Each strand of noodles is chewy and satisfies the urge to eat.

If you’re looking for the original ramen-style noodles but are too broke to go to a Noodle restaurant for them, the heart meal presented by Nongshim is a tremendous and cheaper try.

As for bitterness, not all Chapagetti noodles are bitter, so you have to pick one that suits your taste the most.

It’s recommended to buy a wide range of packaged Chapagetti noodles and then pick your favorite after having a taste of each one. 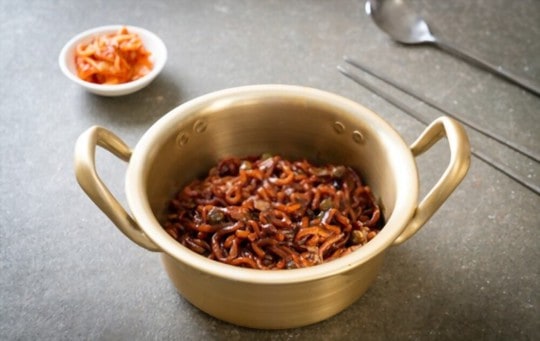 Chapagetti and Jajangmyeon have vast differences with regard to the taste and even the texture.

This is not surprising because Chapagetti is, after all, packaged instant noodles.

However, a lot of people still love it, and the packets of Chapagetti get picked up by many individuals.

This is because it’s highly convenient due to its fast-paced satisfaction with food cravings.

It’s also relatively easy to make because it can be prepared just by opening up the sachets and mixing them in a pot.

It takes a maximum of ten minutes to make it, so you don’t have to contribute much time to please your hungry stomach.

You can either cook them using a stovetop or a microwave.

You only need to boil the noodles for a few minutes and add the different sauces, veggie mix, etc.

Let it sit for a while or until you have got the right consistency for the sauce.

To save time, use already heated water.

If you’re using a microwave for cooking the Chapagetti, you can place all the ingredients (veggie mix, oil, sauce) in a bowl that can be suitable to be kept in a microwave.

Add the noodles later with the water and microwave it for 8 minutes tops.

Mix it all together when it’s done, and enjoy.

ALSO READ
What Does Raclette Taste Like? Does It Taste Good?

What to Serve with Chapagetti? 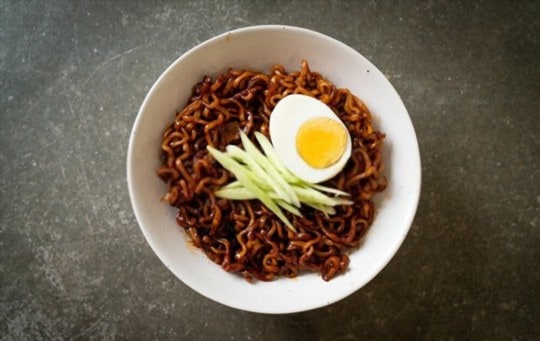 This Korean dish is usually made with chunks of pork or beef, depending on your preference.

As mentioned above, it can be made using a stovetop or a microwave.

It’s best to use a stove if you’re planning to throw in some extra chunks of veggies or meat.

You can use lettuce, leek, carrots, and potatoes and make a nice broth with the noodles.

Other than meat and vegetables, two ways in which you can spice the already spicy noodles up is by adding these:

Dried seaweed can be crushed into tiny pieces by using your hands, and you can use these to top your bowl of Chapagetti by sprinkling them all over.

Roasted sesame seeds and seaweed are the best mixes if you’re planning to have a close to authentic Korean ramen.

A jar of Kimchi is a great snack but add it to your bowl of Chapagetti, and it’s a wholesome meal.

Beat your summer weather and its hated heat with some noodles mixed with Kimchi.

You can even keep it separately and eat the tangy pickle as a side dish if you want.

These are only two of the various side dishes you can serve Chapagetti with.

Kimchi and Seaweed are highly recommended, but you can try and experiment with other dishes if you’d like.

Perhaps you’re craving a bowl of Jajangmyeon, but you realise you don’t have the time or energy to go through the whole process of making the noodles traditionally.

In that case, Chapagetti is the best alternative you can make that’s easy and quick.

ALSO READ
What Do Bonito Flakes Taste Like? Do They Taste Good?

The spicy noodles do not take time to make and are incredibly delicious once they’re ready.

A sachet of Chapagetti takes only a few minutes to prepare, and each of the much-craved flavors is packed within that one sachet.

So, make sure you cook it thoroughly and mix everything well while stirring.