They may sound like something out of a Dr.

Seuss book, but loquats are a real fruit you can find at your local grocery store.

If you’ve ever wondered what this unusual-looking fruit tastes like, wonder no more.

With their vibrant yellow color and oblong shape, loquats are often compared to apricots or plums.

And while the taste of loquat is similar to these fruits, it’s also unique in its own right.

Additionally, these fruits are not only prized for their flavor but also for their nutritional value.

So, make some space in your fruit bowl for this delicious and healthy treat this summer as we take you on a journey to discover what does loquat taste like, what it is exactly, and how to use them. 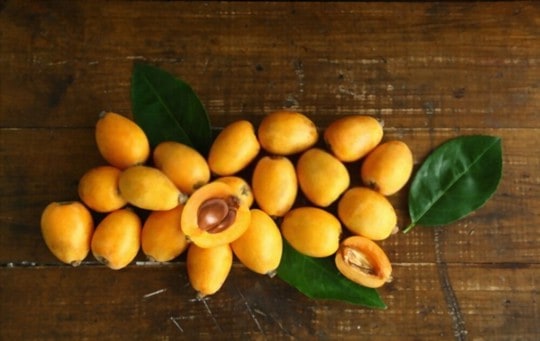 Native to China, loquats are a type of evergreen shrub that produces small, oval-shaped fruits of the same name.

The skin of a loquat is smooth and thin, with a color that ranges from yellow to orange to red.

And inside the fleshy fruit, you’ll find anywhere from two to five seeds.

Loquats are often used in Asian cuisine and can be found in a variety of dishes, from sweet to savory.

The fruits can be eaten whole, with the skin and seeds intact.

Or, the fruit’s flesh can be scooped out and used as you would any other type of fruit.

There are around 800 varieties of loquats, out of which the Japanese loquat, also known as the Nispero, is the most popular.

This variety is often used in jams, pies, and other sweet desserts. 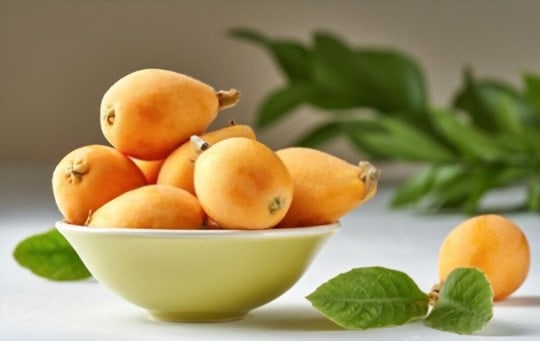 But, the fruit also contains notes of tangy undertone with a sweet tropical-ish flavor.

One can say its taste is a mixture of other fruits like pineapple, apricot, and apple.

The texture can range from tender and crispy to juicy once fully ripened.

Unlike its juice, the flesh carries a floral aroma, which gradually develops with the maturity of the fruit.

As mentioned earlier, loquats have at least two to five large seeds called ovules located in the middle.

In contrast to the sweet and delicious flesh, these seeds are bitter, hard, and quite unpleasant to eat.

Moreover, the seeds are pretty deadly to consume as they contain cyanogenic glycosides, which can release cyanide.

So, it’s best to keep your hands (or mouth) off them.

Now, if you think the only valuable part of loquat is the fruit, think again.

Once these heavenly leaves are infused in water, it creates a flavor that resembles an earthy and sweet tone.

But, there’s more to this fruit than its taste.

From high fiber content to calcium and potassium, this fruit is packed with healthy nutrients.

What’s more? The fruit can keep your teeth clean and healthy, thanks to its abrasive quality.

It also serves as an excellent substitute for natural sugar.

Additionally, it is loaded with antioxidant properties.

How to Cook and Use Loquat? 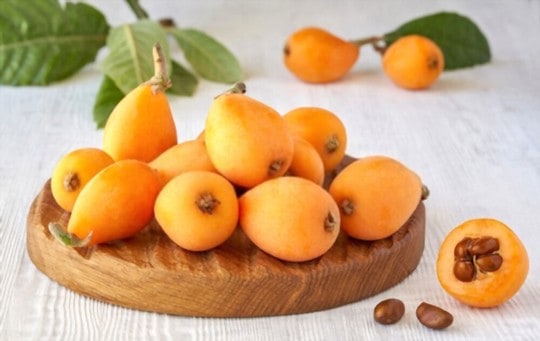 Now that you know what loquats taste like, all there’s left to do is learn how to cook with them.

Loquats can be used in all sorts of sweet and savory dishes, so get creative and experiment.

However, they’re best enjoyed fresh, so try to use them as soon as possible after picking or buying.

To prep loquats for cooking, start by washing them thoroughly.

Cut off the stem and blossom end, then slice the fruit in half.

If the seeds are large, you may want to remove them before cooking.

Then, you can dice the loquats and add them to salads, use them as a topping for yogurt or ice cream, bake them into pies or muffins, or simmer them down into a jam or compote.

Loquats are also lovely cooked with pork or chicken.

Just add a few slices of fruit to your pan when cooking these proteins for a subtle sweetness.

Besides, if you’re lucky enough to ever come across a loquat tree, just pluck a few, rub off the dirt, and eat them as is.

These fruits are so versatile and delicious, there’s really no wrong way to enjoy them.

They may be rare, but they are certainly worth looking for.

All in all, it makes a delicious, easy-to-eat snack, thanks to its sweet and juicy taste.

So, if loquat sounds like a fruit you’d enjoy, we suggest trying it.

They’re perfect for pies, jams, or simply cutting a ripe one and snacking on it.

ALSO READ
What Does Lactose-free Milk Taste Like? Does It Taste Good?

But, if you’re new to consuming the fruit, feel free to look up some of the recipes we mentioned earlier.

Rest assured, you’ll have a delicious meal packed with healthy nutrients by the end.