It can be quite exciting to taste different types of soft drinks.

With major companies like PepsiCo releasing new flavors regularly, you have the opportunity to enjoy many unique beverages.

However, the company produces some varieties only for a limited period.

Pepsi Fire is one of those limited-time soft drinks which came out between 2004-2005.

The company released it along with Pepsi Ice in several Asian countries.

The company again released the refreshing cola with a cinnamon flavored twist in the USA in 2017 and a Slurpee variant in Canada.

The drink received both positive and negative reviews whenever it came out.

What is Pepsi Fire?

Pepsi Fire is a drink from PepsiCo that first entered the market from Late 2004 to Early 2005.

The company calls it Hot Cinnamon Cola, so it’s easy to guess that it has a hint of that spice.

Pepsi Fire re-entered the market in 2017 in the USA, again for a limited period.

Canada also got it in the same year, but only a Slurpee variant.

Unlike most colas which have a caramel brown color, Pepsi Fire has a dark ruby shade, and so it does look different.

Even the orange-red packaging gives a fiery feeling, but what about its flavor? Let’s find out below. 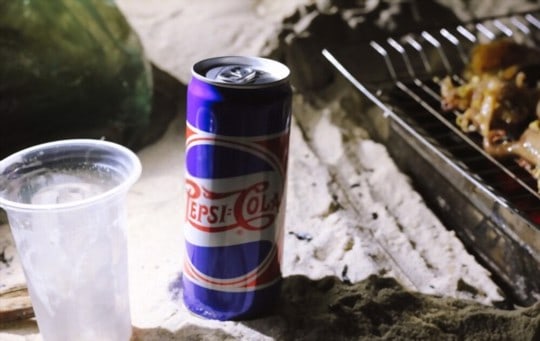 Looking at the name and packaging, anyone would think it’s hot and spicy and will give heartburn.

ALSO READ
What Does Stilton Cheese Taste Like? Does It Taste Good?

In fact, you might even be surprised by how it actually tastes.

It’s twice as spicy as sodas like Mountain Dew and Game Fuel.

Some consumers have even said that it’s too spicy and unpleasant.

But it’s only a few people’s opinions.

When you sip it for the first time, Pepsi Fire tastes similar to regular Pepsi or a little like Pepsi Holiday Spice with a slight cinnamon flavor.

Apart from Pepsi Fire, you can also call it Hot Cinnamon Cola.

Pepsi Fire is dark ruby, and so before taking a sip, you may also think that it might taste like a fruity drink.

But there is nothing fruitiness about it at all.

Instead, it’s sweet and gives you a faint hint of cinnamon later.

It’s undoubtedly not as spicy as other people claim it, but Pepsi Fire does give you a kick.

It’s subtly spicy, so it won’t be a problem for most people.

If you like a little bit of spice and kick in your drinks, then Pepsi Fire is a good choice.

At times, you may even get the taste of a vodka-flavored drink when sipping the ruby-hued Pepsi Spice.

But it’s very subtle, and most people may not even get that taste.

oz) of Mountain Dew has about 290 calories and 250 calories in Pepsi.

You can notice that while it contains a good number of calories and sugar, there’s very little or no quantity of any nutrients.

So, you mustn’t consume large amounts.

Sodas or colas can contribute towards weight gain and other health issues.

Is Pepsi Fire Coming Back?

The company reintroduces its products from time to time, as seen in Pepsi Fire which appeared twice; once in 2004-2005 and once in 2007.

By going through the reviews, it’s clear that it was neither a hit nor a terrible miss.

Some people enjoyed it thoroughly, and they were quite disappointed when they couldn’t find it on the market anymore.

Others have said that the drink was not to their liking.

If you check out the comments section in popular forums or online outlets, you will see that people are still missing the drink and wondering if it will ever return.

They are sad that it was available only a short while.

There is no definite update regarding whether Pepsi Fire will return or not.

But looking at past instances, PepsiCo might just release it once more.

If they see that fans are demanding its return, the company might decide, and we may see the orange-red bottle and cans on the market shelves once more.

But it’s only speculation because since it wasn’t a hit like most of the company’s other drinks, we may not see it again.

But if you are a fan, it’s best to keep your fingers crossed.

Pepsi Fire is one among many soft drinks which came like the wind and left.

Though some people loved it, others didn’t.

Maybe it’s too sweet even for those who like sweet colas.

Perhaps, the spice also contributed to the drink not making a profound impact.

Pepsi Fire is sweet with cinnamon after taste, and it can even feel like a vodka-flavored drink sometimes.

If you want to taste it or drink some more, check out some outlets.

A few places may have it.

If not, check the news regularly and grab a few bottles when it comes out again.